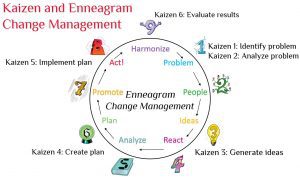 We cannot become what we want to be by remaining what we are.

Kaizen is a Japanese business philosophy of continuous improvement.  It was first practiced in Japan after World War II.  In rebuilding their industrial base, Japan’s industrialists looked to American business and quality-management practices, particularly those of W. Edwards Deming.   The Toyota Way famously came out of this period.  These practices came to be called Kaizen, the Japanese word for improvement, and have been popularized around the world in the wake of Japan’s successful rebuilding of its industries after the war.

While Kaizen is considered more a way of being—a culture—than a methodology, it does incorporate a six-step process depicted as a circle with step 6 leading back to step 1.  Here is a typical outline of the steps:

ECM Step 4: Emotional Reaction. Assess reactions to each of the ideas.

ECM Step 6: Planning. Select the most promising idea and build an action plan.

ECM Step 9: Integration. Confirm the problem is solved with all stakeholders.

Where are the People?

The first thing that strikes me is that the Kaizen approach makes no explicit reference to people whereas the Enneagram approach explicitly has four touchpoints that take people into consideration:

ECM Step 4: Emotional Reaction. Assess reactions to each of the ideas.

ECM Step 9: Integration. Confirm the problem is solved with all stakeholders.

In ECM Step 2 the team considers all the people who are affected by the problem—the stakeholders—while the Kaizen approach does not include a step that explicitly includes all related parties.

ECM Step 4 considers how stakeholders are emotionally reacting to proposed solutions—this is the emotional filter out of which come the ideas with the most positive emotional energy. Kaizen does not take emotional reactions explicitly into account.

After creating an implementation plan, that plan needs to be “sold” to all stakeholders—this is Step 7 in the Enneagram approach. Kaizen skips the step of stakeholder buy-in.

After implementation, both approaches assess results. ECM Step 9 and Kaizen Step 6 are similar, but the Enneagram approach explicitly incorporates feedback from all stakeholder perspectives. Kaizen Step 6 may do this implicitly, while Enneagram Change Management takes an explicit, people-oriented approach.

While the Kaizen approach skipped over the people-centric steps of the Enneagram approach, there is overlap on ideation—step 3 in both systems—and plan creation, step 4 with Kaizen and step 6 with Enneagram.  With Enneagram Change Management, each idea generated in Step 3 goes through two explicit filters, the emotional filter ECM Step 4 described above, and the logical filter ECM Step 5. Since neither of those filters are explicitly mentioned with Kaizen, I suspect that ECM Step 4 is included implicitly with Kaizen Step 3, and ECM Step 5 is included implicitly with Kaizen Step 4.  I assume that ECM Step 7—stakeholder buy-in—is also included in Kaizen Step 4.

The last two steps of both systems are essentially the same, the implementation step—Kaizen Step 5 and ECM Step 8—and the debrief step—Kaizen Step 6 and ECM Step 9.  Whenever there is transformational change, inevitably new issues and problems arise which is why both systems depict this process as a never-ending circle of continuous improvement.  Both systems highlight and intrinsically value the importance of the cyclicity of problem solving.

While I am a big fan of the Kaizen approach and used it early in my career, I realized that it can be quite clinical and not take people into account.  The Enneagram approach explicitly includes people in the process and is indeed a superset of the Kaizen approach, including all steps in Kaizen in the same order!  That Kaizen does not explicitly include people speaks more to the personality styles of the people who created Kaizen than Kaizen itself. And that both systems are so similar, in that both include cyclicity and that the overlapping steps are in the same order, speaks to the fundamental manner in which humans—individuals and teams—solve problems and improve their circumstances.