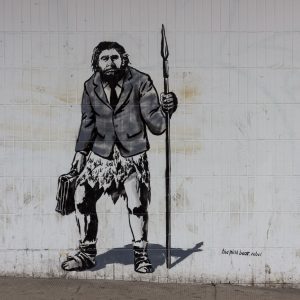 The 23 and Me result that surprised me the most was my ancestry from 40,000 years ago. Testing positive for 281 Neanderthal variants out of 1,436, I am more Neanderthal than 56% of 23 and Me customers. What I learned next shattered everything I thought I knew about my ancient ancestor.

When I was kid growing up, calling someone a Neanderthal was not intended as flattery.  My belief about Neanderthals was that they were, well, stupid.  Clearly, Neanderthals did not survive because Homo sapiens outsmarted them, right?  Every school kid knew that, so it must be right—Right!?!

It turns out that our schoolyard common sense may not have been correct.  Rutger Bregman in his book Humankind—A Hopeful History provides an alternate model.  Looking at the fossil record, Neanderthals had relatively bigger brains than Homo sapiens.  It’s likely that they were smarter than us.  They were also bigger than us.  So, if they were smarter and bigger, why isn’t the world populated with Neanderthals rather than Homo sapiens?

Bregman draws the analogy between wolves and domesticated dogs.  In general wolves are bigger and smarter than dogs, but there are many more dogs than wolves.  Why?  Because dogs are fun, kind and delightful, and we want them around.  Bregman makes the argument that Homo sapiens were the cuddly puppies of the hominid world, and Neanderthals probably liked having us around. They may have protected us.  And, according to my 23 and Me results they mated with us.  But that alone wouldn’t explain why there are so many of us and none of them.

Although Homo sapiens may not have been as smart as Neanderthals, Bregman asserts that we possess a capability that the Neanderthals did not—the ability to share information and learn from one another.  While those smart Neanderthal individuals were trying to figure out things for themselves, Homo sapiens were happy to let one person figure it out and learn from them how to do it.  They would pass that information along to others in a veritable verbal network.  Social media has turbocharged our ability to share our thoughts.  Now, a single individual has the capability to share with millions (perhaps billions) of others. This trait that distinguished Homo sapiens from Neanderthals is as prevalent and important today as it was 40,000 years ago.

While we Homo sapiens may be highly capable of accessing information from one another, we aren’t always good at discerning the information’s truth.  Our critical thinking skills may be compromised for the sake of us all going along to get along. Apparently, lacking the ability to consistently discern truth did not impede Homo sapiens ability to procreate and populate.  The Neanderthals may simply have been overwhelmed by their kind and talkative hominid pets.  Homo sapiens succeeded Neanderthals and spread themselves and their information – both truths and untruths – to every corner of the planet.

Once the wheel was invented, humans shared that information widely—no need to reinvent it, right? And yet we so often do just that.  Sometimes that tendency leads us to discovery and innovation. Sometimes it prevents us from accessing pre-existing solutions that would easily solve our problems. I must admit, I do love puzzling things out.  Sometimes I would rather figure something out for myself rather than research and learn from someone else.  When I feel that way, maybe it’s one of those 281 Neanderthal variants guiding me.  On the other hand, it has become exceedingly easy to access information online.  My phone is rarely out of reach and a quick search often leads me to an answer. Whether that answer is correct or not… Well, that’s a different story.  I wonder what my intelligent Neanderthal ancestors would think about my “smart” phone habits.

How do you balance your time between researching existing knowledge and attempting to invent on your own?  How do you determine the truthfulness of information you access, especially information that appears to be “common sense”?  What have been your epiphanies, the ones that have led you to change your perception of the world?