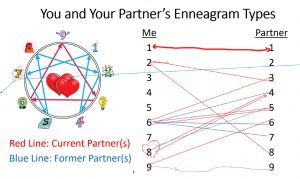 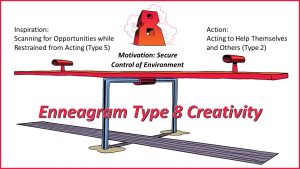 Creativity for Enneagram Type 8 emerges from their intuition.  Somehow, they just know what to do.  Because the process is unconscious, even the most creative Type 8s will often bemoan that they are not creative.  They are so unconscious of their creativity that they may not even realize when they are actually being creative!

Enneagram Type 8s enjoy the freedom to act on their instincts. The 8s are strongly associated with action.  And when in action, they not only tend to work on their own interests, but also the interests of others.  These tendencies can resemble the behaviors of the Type 2 helper along the 8’s path of integration.  However, when prevented from acting, the 8 becomes quiet and observing, looking for weaknesses in whatever is standing in their way.  In this state, the 8 receives inspiration for how to overcome the obstacle, and this behavior resembles that of Type 5 along the 8’s path of disintegration.

Enneagram Type 8 prompts problem-solving teams to action. The Creativity Seesaw I describe in Chapter 5 of my book Teamwork 9.0—Successful Workgroup Problem Solving Using the Enneagram shows the 8 moving back and forth between Type 5 and Type 2 dynamics in their creative process. The fulcrum holding up the seesaw represents their intrinsic motivation.  The 8 is in the Gut or Intuitive Center of the Enneagram, the underlying issue for which is anger.  Anger is the go-to tool for the 8 to achieve their motivation’s end, securing control of their environment.

Whenever Type 8 is prevented from securing control and their intuition doesn’t immediately present a course of action, the 8 becomes a quiet observer as they size up the threat and look for weaknesses, behavior which resembles the Type 5 observer.  Being in the Intuitive Center, the answer will likely emerge without much deliberate thought.  Inspiration is often unconscious for the 8 which is why many 8s don’t attribute this ideation to their own creativity.  They will likely have better access to this dynamic when they are not in action and especially if they are under threat.

Enneagram Type 8 Inspiration: Scanning for Opportunities while Restrained from Acting

Enneagram Type 8 Action: Acting to Help Themselves and Others

Once an idea, like a strategy for re-assuming control, surfaces they jump back to action.  Often the 8s will engage in righteous fights, meant to bring justice and fairness to themselves and to others. As they achieve their objectives, they can be seen as fighting for the benefit of others, and thereby resembling the dynamic of Type 2.   The 8s proceed until again they encounter an obstacle that prevents forward motion, and thusly they swing back and forth on their Creativity Seesaw.

To practice any art, no matter how well or badly, is a way to make your soul grow. So do it. – Kurt Vonnegut

The creative process moves back and forth between inspiration and action.  The Type 8 clearly has access to both dynamics.  The 8 can stay in action because their intuition is feeding them answers continuously and unconsciously.  This is so natural for the 8 that they often don’t even realize how creative they are.

The way to get started is to quit talking and begin doing. –Walt Disney

When do the Enneagram Type 8s in your life jump to action?  How are their actions helping others? How do they respond when prevented from moving forward? 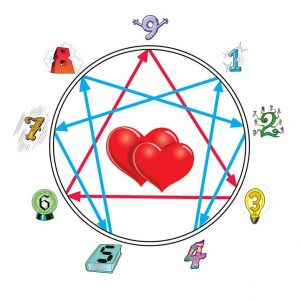 What does the Enneagram tell us about where Cupid’s arrow may land? In this session we will explore compatibility between Enneagram types in relationships with our significant other. Also, we will examine how self-love helps us to better navigate these relationships.

Where did the Enneagram come from?  What are the nine Enneagram types?  What’s my type? Can I be more than one type?  Join us for this back-to-basics Enneagram discussion where we discuss these and many other topics.  Those new to the Enneagram are welcome to join.  Those familiar with the Enneagram are encouraged to share their perspectives and help those who are just beginning.

Enneagram Subtypes—Wait! There are actually 27 types?

Even those who are the same Enneagram type can have very different approaches to navigating relationships. One way to understand these differences is with Enneagram subtypes. For each Enneagram type, there are 3 subtypes. These are commonly called self preservation, one-to-one, and social. We will also consider Mario Sikora’s approach to subtypes. He calls them preserving, transmitting , and navigating, respectively.

In the recent Action to Awareness podcast series, Sikora and his team explore the subtypes by examining a movie that highlights the subtype behaviors. Here are links to the podcasts:

In preparation for this discussion, you are encouraged to listen to the podcasts and watch the movies. 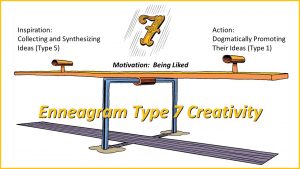 Enneagram Type 7s are the honeybees of the Enneagram. Rather than pollen from flowers, they pick up ideas from people as they go from person to person throughout the day. The creative process for Type 7 is like making honey!

You can’t use up creativity. The more you use the more you have. —  Maya Angelou

Enneagram Type 7s are continually looking for the next fun thing to do which makes this type very open to ideas for new things to try out. This process of collecting ideas resembles behaviors of Type 5 along the 7s path of integration.  The 7 can stay in this state as long as everyone is happy and having fun.  When things become less positive, the 7 becomes determined and focused on restoring positivity. That determination can resemble behaviors of Type 1 which lies on the 7’s path of disintegration.  Type 7s creative process tips back and forth between collecting ideas and promoting ideas.

Enneagram Type 7 brings tremendous positive energy to problem-solving teams.   In Chapter 5 of my book Teamwork 9.0—Successful Workgroup Problem Solving Using the Enneagram, a playground seesaw represents the back-and-forth motion between inspiration and action for each Enneagram type. Each type has a distinct seesaw on the playground. The seesaw’s fulcrum represents each Enneagram type’s intrinsic motivation, and higher fulcrum height represents higher motivation and deeper swings between inspiration and action.  Type 7 is in the Enneagram’s Thinking or Head Center, the underlying issue for which is anxiety.  Type 7’s anxiety levels depend on their relationships with those around them, and specifically on whether or not those relationships are positive.  To minimize their anxiety levels, Type 7s strive to create a positive environment so that they can be liked.

As the 7 engages with others, they seek to make those around them happy. Type 7s are talkative, charming and amusing. They are always on the alert for ideas to make others happy.  They collect these ideas and talk about them with others to see which ideas get the most positive reaction.  This processing of ideas can very much resemble the thoughtful behaviors of the analytical Type 5, and the 7 has access to this dynamic especially when their anxiety levels are low.

Anxiety levels increase for the 7 when there is negativity in the environment, especially if someone is unhappy with them.  This negativity prompts the 7 to reach into their beehive of ideas and start promoting those ideas that will restore a positive attitude towards them.  They can become quite determined in their pursuit of positivity, a dynamic that can resemble the doggedness of Type 1.  As the 7 succeeds in restoring a positive environment, anxiety recedes, and the cycle begins again, back and forth on their Creativity Seesaw.

Creativity is just connecting things. When you ask creative people how they did something, they feel a little guilty because they didn’t really do it, they just saw something. It seemed obvious to them after a while. – Steve Jobs

Type 7s often do not know from where a specific idea came. Like the honey in the beehive, it is often the amalgam of many different ideas picked up over dozens of conversations. As the 7 is constantly engaged with people, they are continuously synthesizing and promoting fun ideas, making people happy, all of which results in them being liked.

How do the 7s in your life come up with ideas?  How do they react to negative situations?  When do you experience them sharing ideas to get you excited? 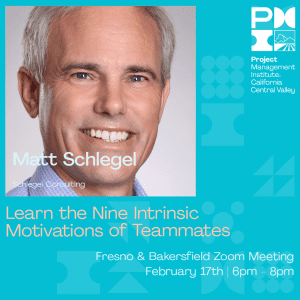 Looking forward to delivering an engaging online workshop for Project Management Institute—California Central Valley Chapter on Wed Feb. 17 at 6PM Pacific with co-collaborator extraordinaire Yvonne Burton. We gave this workshop to the Sacramento Valley Chapter and it sold out with 100 registrants, so sign up soon! Hope to see you there.

Description: One of the biggest challenges for project managers is understanding what motivates their team members. Likely, project managers have a good idea of what motivates themselves, and they may project their own motivation onto others. That strategy may or may not work. Some individuals may have completely different motivations, and the manager may struggle to understand those differences. The Enneagram is a tool that describes nine distinct personality styles, each with a distinct – and distinctly different – motivation. By knowing the Enneagram style of team members, and by understanding each person’s intrinsic motivation, a project leader can individually motivate team members to complete assignments.

Description: What does the Enneagram tell us about where Cupid’s arrow may land? In this session we will explore compatibility between Enneagram types in relationships with our significant other. Also, we will examine how self-love helps us to better navigate these relationships.

6/16: Living the Experiences of Other Types