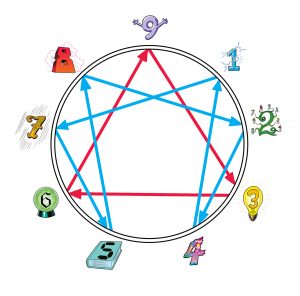 I am frequently asked about the difference between the Enneagram and Myers-Briggs Type Indicator®. First, one requires a registered trademark symbol, and the other doesn’t.  But, let’s not start there, let’s start with the origins of each system.

MBTI® is a personality typing system devised by Katharine Cook Briggs and her daughter Isabel Briggs Myers based on Carl Jung’s work.  The system was used in America during World War II to help women entering the manufacturing workforce to land in a role most suited for them.  In other words, it was used to determine that Rosie would make an excellent riveter. The first handbook on the system was published in 1944 and the system grew in popularity thereafter.

Origins of the Enneagram

The Enneagram system has roots tracing back to ancient Egypt and Greece.  The system describes the order of dynamics that occur in nature, which is why the types are numbers.  These dynamics include but are not limited to personality dynamics.  The personality system that we understand today was developed by Oscar Ichazo in the 1950’s and the system grew in popularity thereafter.  Unlike MBTI®, the Enneagram is not attributable to any person or group of people, but represents collective wisdom accrued over millennia.

The Enneagram system describes nine personality types, each type represented by a number, e.g., Type 4. The nine types are evenly distributed around the circle of the Enneagram diagram.  The nine types can be grouped into three groups of three types.  The three groups, or centers, are called the body-intuitive center, the heart-feeling center, and the head-thinking center.  Types 8, 9 and 1 comprise the body-intuitive center; Types 2, 3 and 4, the heart-feeling center; and Types 5, 6 and 7, the head-thinking center.

MBTI® puts introversion and extroversion front and center as the first dimension in that system.  Interestingly, Carl Jung was an introvert having a storied rivalry with a famous extrovert, Sigmund Freud.  It is interesting how this rivalry is memorialized by the first letter in the MBTI® system.  The Enneagram, on the other hand, takes the approach that while some types, like Types 3, 7 and 8, are more extroverted than others, each type can have an extroverted or an introverted side.  These differences within type are captured by the Enneagram’s “wing” types, the type on other side of any given type.  Also, each Enneagram type can have a sub-type—self-preservation, intimate, or social—that speaks to three points or modes on the extroversion-introversion scale.

In researching how the brain influences types, I came across Peter Savich’s work Personality and the Brain (http://personalityandthebrain.org/paper.html). Savich has developed a fascinating model tying amygdala and prefrontal cortex function to the nine types described by the Enneagram. Furthermore, based on Behave: The Biology of Humans at our Best and Worst author Robert Sapolsky’s description of the brain’s influence on behavior, I suspect that the insular cortex is responsible for the behaviors described by the Enneagram’s sub-types.  Three parts of the brain may drive modalities for the Enneagram’s nine types (twenty-seven types including subtypes). I have yet to see a similar model mapping brain functionality to MBTI® types.

Both systems provide a platform on which to understand that there exists a multiplicity of styles and that different styles serve different roles on teams and in society.  Both systems allow us to appreciate the diversity and value of the other styles.

I like the way the Enneagram describes motion and change over time.  There is the motion around the circle, from 1 to 9, as we move through problem solving—the topic of my book Teamwork 9.0.  There is the motion described by the lines within the circle, sometimes referred to as the paths of integration and disintegration as each type moves in and out of stress, maturity and security.  The Enneagram describes how our behaviors can change over time.  On the other hand, MBTI® represents a static system, more of a fixed snapshot of personality independent of time.

With the advancement of brain scanning technology like fMRI, I expect that over time we will understand how each personality system maps to specific brain functionality.  The Enneagram holds promise for a simple, elegant mapping between the Enneagram types and subtypes and three parts of the brain that drive behaviors, the amygdala, the prefrontal cortex, and the insular cortex.

I see the Enneagram as the cumulative knowledge over millennia of humanity’s quest to understand nature, in particular human nature.  It is a balanced approach that represents each dynamic evenly. MBTI® on the other hand was designed to quickly plug people with a certain proclivity into a role at a factory.  Rather than emerging from a pursuit of truth in nature, it was conceived from the mind of an introverted man (Jung) a century ago and popularized by the need to deploy an untapped labor pool in time of war.

Finally, the Enneagram is yours—it belongs to you.  There is no registered trademark.  You do not need a license.  It is the collective wisdom of humanity, your ancestors. You are free to try it, use it, explore it, play with it, and have fun with it.  The more you study it, the more you learn.  I have been studying it for nearly 20 years, and I feel like I am just beginning to appreciate the power of the Enneagram.