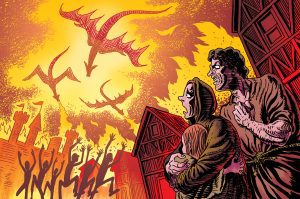 Our planet’s landlord is warning us. Teamwork 9.0 illustrator James Yamasaki expressed in this image exactly how I felt as I looked out at the burnt-orange smoked-filled sky of the San Francisco Bay Area—somewhere at the intersection of horrified, angry, and terrified. What should I do now?

I recently watched a film that I do not recommend to anyone susceptible to feelings of depression or despair. Spoiler alert!  This movie examines the human response to humanity’s inevitable demise as a rogue planet collides with and obliterates Earth. That was the end. There was nothing anyone could possibly do to prevent the inevitable Newtonian fate. This movie makes me think—which problems can we take on, and which problems are just too big for humanity?

Nothing bonds a group together like a common problem, a common enemy so to speak.  The more dangerous the enemy, the more likely people will band together to protect themselves from that enemy.  Identifying the common problem is the first step in problem solving.  In Teamwork 9.0, I take the reader through a story of a medieval village beset with fire-breathing dragons. The dragons served as the common enemy that brought everyone together.  In my wildest imagination, I had no idea that a freak summer lightning storm with 14,000 lightning strikes (the dragons) would ignite our landscapes filling the skies with smoke and creating an ominous, dark-orange hue in the middle of the day, just as depicted in the book’s illustration. Now the fires and smoke have spread to the entire western United States. We certainly share that common problem.

While in the Bay Area we suffered toxic, acrid air, others have endured the loss of their home and some even loved ones. My heart sincerely goes out to all those who are suffering loss. Compounded by the threats of Covid-19, this moment is truly tragic.

A group of blindfolded people in a room are experiencing a variety of problems.  One person complains that it stinks.  Another is getting dripping wet.  Yet another groans that they are being crushed against a wall.  They take off their blindfolds and realize that there is only one problem—that there’s an elephant in the room.

In California we see a fire season that now starts in January and ends in December; record-breaking heat; rolling blackouts; a mass migration of beetles that have decimated forests turning them into a tinderbox; a freak summer electrical storm with 14,000 lightning strikes; and thousands of newly-displaced citizens.  Further out we find hurricane-velocity “derecho winds” that decimated Iowa’s corn crop; frequent “blue sky flooding” in low-lying coastal regions; 5 tropical storms hurling towards the East Coast at the same time; and, the earliest ever R-named storm (Rene) during hurricane season. Even further out, we find wide-spread bleaching of coral reefs and a staggering 68%(!) of wildlife species gone extinct since 1970.

Climate change is the elephant in the room.

On January 23, 2020, Doomsday Clock keepers, Science and Security Board Bulletin of the Atomic Scientists, moved the Doomsday Clock closer to midnight than it has ever been, releasing this statement:

Race Against the Clock

In a conversation with a conservative friend, I questioned him on global warming and climate change.  After we worked through various layers of his belief system, he finally admitted that even if climate change were real, he would not trust the government to respond. This friend does not live in California, has not experienced what we here in the Bay Area are experiencing, and has not yet felt any adverse effects of global warming.  Curiously, this same friend is fine with a government response when our nation is posed with a national security threat, a threat that he feels but understands he is unable to address individually.  His ability to have faith in the government to address national security threats on his behalf gives me hope that he will come around to a governmental response once global warming threatens him and his family directly.

The question is not IF we will all feel the threats posed by global warming but WHEN we will feel them. Once we feel that threat, we will demand a response from our government, local, state, or national. When enough of us feel that threat, it will serve as a tipping point; the point at which we demand concerted action and a proportional response.

Meanwhile, global warming proceeds unabated with its own set of cascading tipping points:  methane releases from thawing tundra, dramatically reduced reflection of solar heat in the polar regions, and Manhattan-sized ancient ice sheaving off of Greenland and Antarctica.    Will humanity reach our tipping point to action before global warming’s cascade of tipping points puts our ability to respond effectively out of reach?

How do we want this movie to end?  How will we respond? Like with the planet Melancholia, global warming’s path is predicted by science.  While the global warming movie will play out over the course of the next few decades, centuries and millennia, the movie has already started, and we humans are the screenwriters with about 10 years left to finish the script.  When blue skies return will we ignore our responsibility and forget what happened, or will we take action to ward off future catastrophes?

How will your part of the script read?